You can either fill in a player's name so it will cast on that target no matter what you target, or you can leave it blank to make it cast on your current target.- leaving the player's name area of the macro blank can also cause the beneficial spell to be cast on your current target's implied target assuming the current target is a mob. For example, you are attacking a mob who is currently attacking another group member. You can cast a heal and it will fall on the attacked group member without having to explicitly target them.Some listings of ingame 'slash commands' which can be used in macros can be found at these links (some are getting pretty old now and haven't been updated for a while):(eq2). TBTH - I haven't found a way to get more than the 3 hotbars going (besides the shift+1, shift+alt+1, shift+ctrl+1, etc., to swap hotbars around - which incidently can be a real pain in mid-combat hence why I disable it!)Training dummies = Kunzar Jungle - Tabernacle of Pain - training 'walls' which are free but you will need to do the faction quests so you are not KOSAlso - if you have a guild hall:Training Dummy Supply ChestAllow members to spawn training dummies for combat practice.Purchase: 5p 500,000 statusUpkeep: 10g 2,500 status. 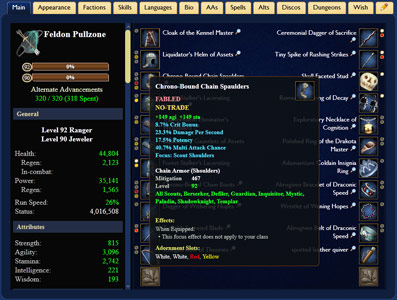 I had to ask on the boards on that one, it sounds like a bug. If you run the macro through test it works like it's supposed to, but it stops working the second you try to use the actual macro. I'll post back once I hear something, but until then they'll probably just say use queueing and put a long cooldown ability at the end if you don't want to spam a low-cooldown attack.Ah, I didn't think to run them through the test button. I just put it on a hotbar and spammed.But, it still works a LOT better than what I was doing. I was able to kill stuff that had previously been slaughtering me.