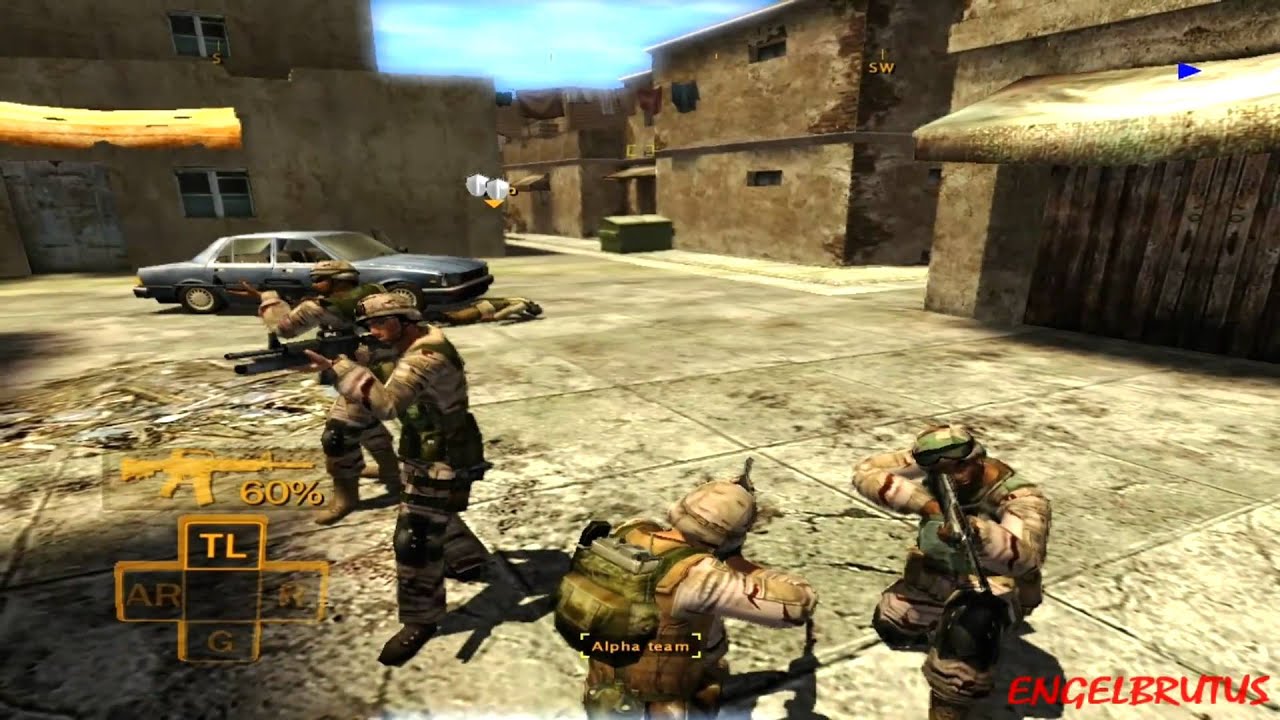 At first glance, Full Spectrum Warrior looks like the zillion other tactical shooters on the market or in development. You see the screenshots of realistic soldiers wandering through urban areas and think, “Hmm, Rainbow Six? Black Hawk Down?” But there’s a big difference that separates it from the pack: this is not a shooter, but more of a strategy game. You don’t control any individual soldier, you give orders to the team leaders and they follow them based on proper military protocol.Full Spectrum Warrior works better as a concept than a game. Originally developed as a military training simulation, it has an innovative and simple control scheme adapted from the Xbox, superlative squad AI, impressive production values, and it feels more “real” than most games of its kind. But it never really takes off, seeming perpetually stuck in neutral rather than shifting to the higher gear it feels like it should achieve. And after playing through the first couple of levels, you’ve pretty much seen everything Full Spectrum Warrior has to offer on the long haul.Yet despite this, Full Spectrum Warrior isn’t a bad game by any measure. The atmosphere is superb, the graphics nice (the fuzzy soft-lighting effect has to go, however), and it’s tactically interesting. But it’s not really an action or strategy game—it’s a series of simple linear puzzles you solve using a few simple squad-based tactics.

You learn these tactics in a series of optional MOUT (Military Operations on Urban Terrain) levels. All of the tools at your disposal are unveiled: how to control both of your four-man fireteams, how to use cover, how to suppress the enemy, how to negotiate a city street, and so on. Once you’re in the vaguely Middle Eastern urban environments, the real action begins. The initial missions are exciting, and applying your newfound knowledge about the strategy and tactics of small fireteams is interesting. The soldiers behave perfectly, illustrating how they cover all directions at all times.

The interface is superb, in large part thanks to its console development. Too many PC developers feel compelled to assign keys to every function, or give the players almost too much control. In Full Spectrum Warrior, the interface is simple but not simplistic.Unfortunately, the actual combat plays out almost identically in every mission. The enemy is entrenched in some spot, and you examine the map and try to figure out how to handle the situation without leaving either team unguarded.

It teaches you a lot about teamwork as you leapfrog from cover to cover. As a teaching tool, this may provide some welcome instruction or serve as reinforcement. As a game, though, it’s not exactly the most compelling and varied experience. The enemy rarely does anything unexpected, as everything is pre-scripted to occur in certain ways at certain times.Also, the notion that cover is always 100% effectove (unless you’re behind a destructible object) is, on the one hand, good for slowing down the game and keeping it from getting too hectic—it’s practically turn-based—but it also reduces both gameplay and realism to a very repetitive mix of providing covering fire, flanking, suppressing, rinse, repeat. Again, once you’ve played through the first few levels, you’ve pretty much seen it all.Because of the repetition, the included co-operative multiplayer isn’t particularly interesting.

Two players can play through each mission, each controlling one group. But it’s just a matter of saying, “Suppress” to your teammate, then doing the exact same leapfrog maneuvers. Full Spectrum Warrior is a fascinating game because the only way to “win” is to follow proper procedure—there’s almost no way to “Rambo” a level.

But while realism is an admirable goal, to paraphrase Sid Meier, if given the choice between realism and “fun,” always go with the latter. The actual game itself is often less entertaining than games less concerned with realism and procedure.System Requirements: Pentium II 333 Mhz, 64 MB RAM, 580 MB HDD, Win95.